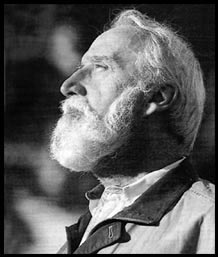 Desmond Muirhead, the golf architect who created the Rossmoor Golf Course in 1966, was born in England in 1923 and educated at Cambridge University as a land planner and architect. He did not become involved in golf course architecture until he worked on retirement communities in Arizona in the early 1960s and 70s, and then leaped at the opportunity to design golf courses along with his new communities. During these years, he designed a number of traditional golfing layouts.

Edward Pazdur, publisher of Executive Golfer magazine — for which Muirhead wrote for 16 years — said in a 1997 article that Muirhead had coined the phrase “golf course community,” and every golf course and community built in the last 30 years were based on his innovative designs. “His concept was that the golf course determined the shape of the community and not the other way around.”

Gene Sarazen, the first golfer to achieve the Grand Slam in professional golf — the US Open, the British Open, the PGA Championship and the Masters — called Muirhead the greatest golf course architect of our time. Sarazen was present for the dedication of the Rossmoor course on Nov 9, 1966, and was one of several top golfers, including Arnold Palmer, Jack Nicklaus and Nick Faldo, who formed partnerships with Muirhead. With Nicklaus, Muirhead designed such famous courses as New Saint Andrews in Japan, La Moralea in Spain, Kings Island in Ohio, and Muirfield Village in Ohio.

Most architects, such as A.W. Tillinghast, had a long history of playing golf. Muirhead, on the other hand had a high handicap and rarely played.

During the course of his career, he traveled the world, designing golf courses in many countries. He received many accolades for his work and was called the most innovative golf course architect in the world by Sports Illustrated. 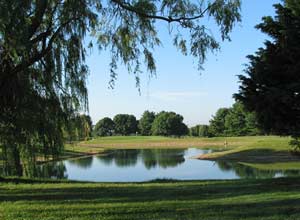 On Oct 27, 1966, Leisure World News interviewed Muirhead about the Rossmoor Golf Course prior to its November 1966 dedication. He said: “A golf course should be beautiful, not a whole bunch of tees and green coming to a point, but a thing of logic and sequence with a road running around it, so that the whole community can look in and enjoy it — can catch a glimpse of the trees and lakes as they go driving by — a fascinating vista of rolling green fairway terminated by a great beautiful green with its red flag fluttering bravely in the distance.”

(Graphic on the left looks across the lake toward the 2nd hole at Rossmoor.)

Muirhead continued: “A golf course should: in fact, be treated as large scale landscape design. For instance, although many trees have been planted, gaps were left at intervals to allow fairways to inter-penetrate to increase the sense of spaciousness and to allow for formation to vistas and panoramas to those driving around the roads or playing the course.”

“When the trees are grown, as you walk along each fairway from tee to green, a new and exciting view will unfold. In this way each hole will be a new visual experience. And each successive hole will produce changing scenes like a well-decorated play, leading up to a crescendo on the last hole.”

“The holes are carefully organized to provide a challenge regardless of whether or not the player hits a short, medium, or long iron.For instance, No 12 hole is unique in golf. A four-fingered lake folds into the fairway with a tee against each fold, so that the hole plays from 160-180 yards over water for a championship senior tournament from 110-160 or 75 yards from the different tees.

The green and rear trap are designed to increase the permutations by which the hole can be played.”

“Hole #13 which will play around 440-500 for the average player, has lakes and traps placed to hinder only the long-hitting seniors.

Traps around greens and the greens themselves are set up so they can be easily viewed from the hitting area and so they will hold a long iron approach shot.

“The two large lakes on the course cover seven acres and are entirely lined with large strips of 10mm plastic sewn together, and back filled with sandy material. This process insures the conservation of precious water. It is believed to be the first golf course so constructed in the Eastern United States”.
Reported by Gene Horanin The Rossmoor News March 2002 edition.

In the mid 1970’s, Muirhead left US golf architecture and went to Australia where he concentrated on creating large community development projects. Perhaps this exposure to different parts of the world changed his basic philosophy of how to create a new course and gave him different aesthetic expectations. Because he lived for some years in Hawaii, there are Muirhead Golf Courses there as well.

Whatever the reason, when Muirhead returned to the United States in the mid-1980s he set about to design more ecclectic courses radically different from any he had done before. For example, a par five at the Aberdeen Golf Course in Florida is shaped entirely as a mermaid complete with fan-tail tee box, fish shaped bunkers, with earthen “scales” placed throughout the fairway! Other holes include an outline of a fire-breathing dragon with bunkers as eyes, and bunkers in the shape of Nordic crosses.

At the Stone Harbor CC in southern New Jersey, many holes are assigned a mythological character such as “Pegasus,” “Jupiter” or “Prometheus.” Others have different motifs. For instance, the 9th hole replicates the geography of Stone Harbor’s part of the North East . . .

. . where the Atlantic is represented by a continuous lake culminating in a green shaped like the State of New Jersey subtending an island trap shaped like Manhattan complete with stone skyscrapers. On there other side of the green there is a trap in the form of Pennsylvania. The large fairway trap is shaped like New York state and there’s even a set of mountain-like mounds called the Poconos. – From the Stone Harbor CC WebSite

As you can see, Muirhead was not a typical golf course architect. Yet his writings on golf course architecture are described as superb, ranging from the philosophy of design to the details of construction. Muirhead was a thoughtful designer and was one of the first to understand the importance of a safe relationship between the golfer, golf course, and adjacent development. He has been celebrated by major design magazines such as Metropolis and Architecture.

When Desmond Muirhead passed away on May 2, 2002 in California, the world of golf lost one of its most unusual and innovative designers.